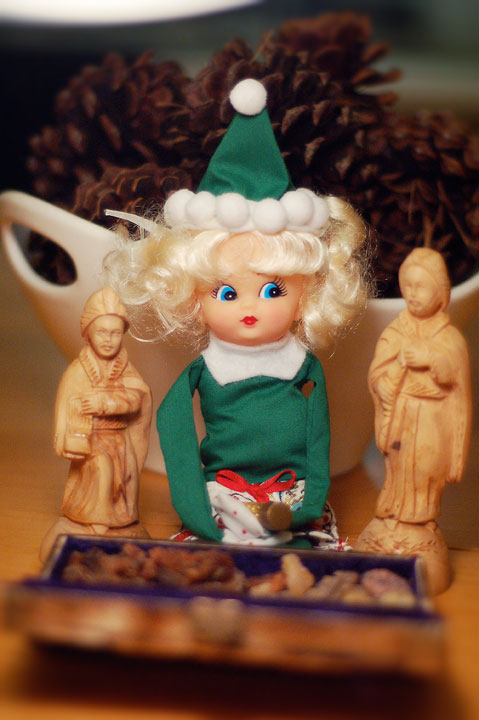 Twinkle came across another two wisemen last night. They were so kind as to show her the gifts they brought for the baby Jesus. 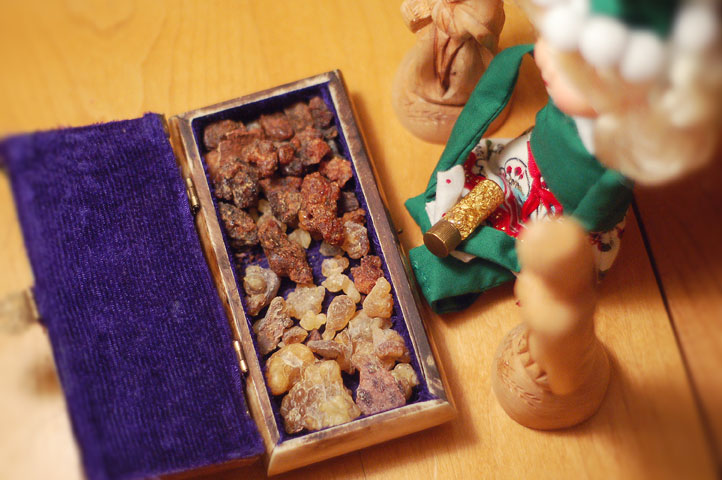 This was another treasure we brought home from our time in the Middle East – a box of frankincense, gold and myrrh. Twinkle is obviously drawn to the twinkly gold, and couldn’t help but hold it a little.

This little box was actually a gift from my parents, who included the following explanation of these special gifts:

The different pieces of this gift are similar to those that were given to the Christ child in Bethlehem.  The chest is hand crafted in India from camel bone.  Each chest is unique, as it is carved by individuals who have been doing this for hundreds of years.  The camel is sacred in this region, as it was the basis of life for most people.  It was used for transportation in a barren land where other animals could not survive.  Its meat and fatty substance were used for food, its hide for floor coverings and clothing, its waste for burning to provide warmth, and lastly the bones were used for making many different ornaments, tools and containers.  The chests were purchased at a Souk (old market place) in Al Karama, located in Dubai, in the United Arab Emirates.

Frankincense (Lighter Color): Frankincense was one of the gifts given to Christ at his birth.  There are over 52 references to Frankincense in the Bible.  Frankincense is “holy incense”, it is used to “help improve communication with God”.

In many civilizations (Egyptian, Greek, Roman, Chinese, Arab, Indian, etc.) it was used as an anti-depressant, anti-infection, immune stimulant, and sedative.  At present it is used for asthma, ulcers, headaches, laryngitis, pneumonia, respirator problems, sciatic pain, stress, typhoid, wounds, warts, and to strengthen the immune system.   This sample was provided by His Excellency, Abdullah A. A. Ibrahim, the Governor of the Dohar Municipality, in the ancient city of Salalah, Oman.  He hosted a group of LDS families that were there to tour the area in southern Oman known as Wadi Seqh, which is considered by many historians to be the location known as Bountiful, where Lehi built his boat prior to his journey to the America’s.  Most foreigners are not allowed in this area, as a military checkpoint guards the road to the location, which is also known as the Frankincense Trail.  Through the generosity of His Excellency, not only were we allowed to pass, but he provided a guide and power boats to spend a day touring the sights known for this historic event.  At the end of the day, he hosted dinner for the families at his residence.  The dinner consisted of typical Omani food such as rice, chicken, camel meat, fried camel fat, unleavened bread, and many desserts including Omani Sweets.  At the end of the evening, we saw his own personal Frankincense tree, and he provided us with bags of this incense.  It is of the highest quality, and is still used in his household for many purposes.

Gold: This gold sample is pure 24K gold leaf.  The gold given to the Christ child was thought to be actually in the form of artifacts.  It is interesting to note that in those days, Frankincense and Myrrh were revered the same as Gold.

Myrrh (Darker Color): Before the baby Jesus received Myrrh as a gift over 2000 years ago, Myrrh was one of the most desired and most sought after items in the world.  It is mentioned in the Bible 22 times and it was used as incense in religions rituals.  It was thought to promote spiritual awareness and be uplifting

It was used in embalming, as well as a cure for cancer and leprosy.  Myrrh, mixed with coriander and honey, was used to treat many diseases.

This sample of Myrrh came from the historic city of Muscat, Oman  It was purchased in the old Souk (market), where it is still available for medicinal and aromatic uses.

May your Christmas this year be as special as that day over 2000 years ago when a child was born who changed life and gave hope for many millions of people all over the world.

This entry was posted in Christmas, elf on the shelf. Bookmark the permalink.