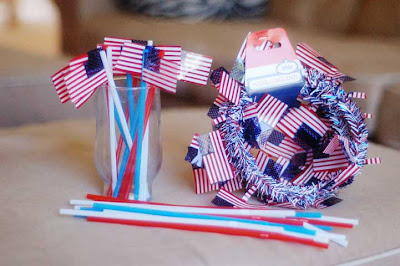 I am excited to sing some patriotic songs this Sunday for the Fourth of July. I plan on singing the following:

Because these are all new songs for our children, I will write the lyrics on large sheets of paper to hang on the chalkboard. I am still working out the details for what I will do for each song, but today I am working on these miniature American flags for the children to hold as we sing, “My Flag, My Flag”. I found the flag garland at Dollar Tree. It has 50 – 60 little flags on it that I am cutting off and taping to red, white and blue straws. I also trimmed the bendy part off the straws to make them more proportional to the tiny flags.

This entry was posted in Primary Singing Time. Bookmark the permalink.