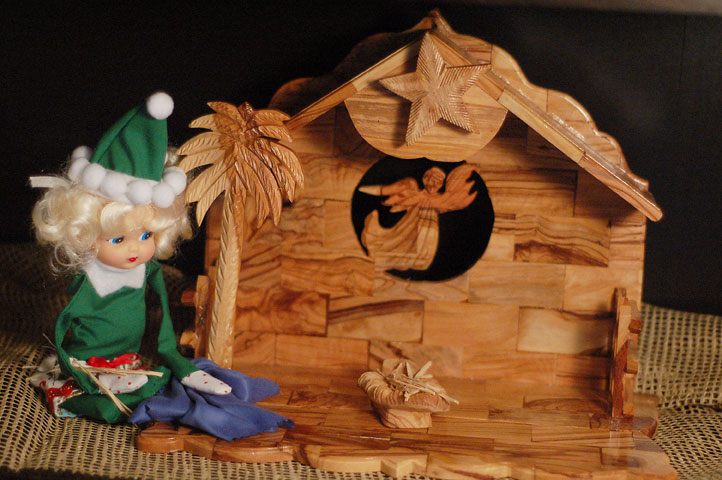 At our most recent Faith in God activity, the girls’ leaders made some wonderful Christmas books for everyone. They are a compilation of stories, music and scriptures to be read every night of December. Last night we read the story of “Davey and the First Christmas” by Beth Vardon, which is as following:

Let’s pretend there was a boy, and Davey was his name,
Whose family lived in Bethlehem when Christmas time first came.
Davey had a special pet–a donkey small and gray,
And what the two of them did best was getting in the way!

Davey named the donkey Tim. He never rode him though.
Either Tim was built too high or Davey was too low!
Davey’s father had an inn where people came to stay;
And lots and lots and lots of them were coming there one day.

His father was as busy as six or seven bees!
So Davey said, “I want to help, can’t I do something, please?
Tim would like to help you, too.
Find a job for us to do!”

“Listen, son,” his father said; “Last week you broke three jugs.
You scared my two best customers with your pet lightening bugs!
You tracked in mud on my clean floor; you tripped and dropped the bread.
And though I loved the fish you caught–why leave them on my bed?

I’ve put up with your helpfulness as long as I am able.
So do me one big favor now, get out–and clean the stable!”

Davey sadly went and stood beside the stable door

It hardly seemed that anyone could clean that dirty floor.

First, let’s chase those chickens out. That’s what we’ve got to do.”
So, Tim began to flap his ears while Davey shouted, “Shooooo!”
The chickens clucked and flew and ducked, they fluttered wild and scary,
Until their feather filled the air, like snow in January

Yes, Davey chased those chickens out, He and Tim together.
But now he had to get a sack and pick up every feather!

You should have seen how hard they worked! They stacked up all the wheat,They straightened up the harnesses until they were nice and neat.They fought with spiders bravely till they chased out every bug.

And since we must admit the truth–they broke another jug!

The very biggest job of all was stacking up the hay.
Davey climbed up to the loft and put it all away.
Look, Tim, You see how high it is? I’ll make just one more trip.”
Then clear up by the stable roof his feet began to slip!

Down came the hay and Davey, too. The stable looked so queer˜
All you could see was piles of hay–one sandal, and one ear!
Slowly they came out on top, and Davey didn’t whine,
Though hay stuck out all over him just like a porcupine!

He put the hay all back again and stacked it up with care–
But left one armload down below to fill the manger there.

So Davey’s work was done at last, and when it all looked neat
He picked some flowers to trim the barn, and some for Tim to eat.
“I hope it’s clean enough,” he thought. “At least I did my best.”
And feeling very, very tired, he curled up for a rest.

Who woke up Davey from his sleep? Just guess them if you can.
Mary was the woman’s name; Joseph was the man,

Mary said, “Oh Joseph, look! This is a lovely place!”
Then, seeing Davey there, she said, with shining face,
Your father’s inn had no more rooms; tonight we’re staying here.
So tell me now, are you the boy who cleaned the stable, dear?
And did your donkey help you work? We want to thank him, too.”
Though Davey was still half-asleep, his heart was glad clear through.

So, that is how a little boy two thousand years ago,
Stayed on to hear the angels sing, and see the Star aglow.

As soon as Baby Jesus came to use the manger bed;
Then Davey’s sack of feathers made a pillow for his head.
No one told Davey anymore that he was in the way.
His work had helped get ready for the world’s first Christmas Day! 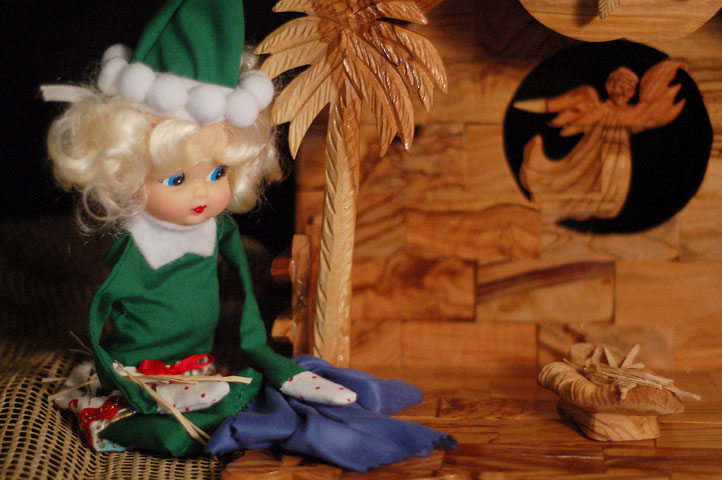 Twinkle must have been listening, because when we woke up this morning, a shelf had been cleared from our bookshelf, and the beginnings of a nativity were set up. We found Twinkle polishing the olive wood stable and setting fresh hay in a manger.

“Davey and the First Christmas” comes from a vintage book, no longer in print. The illustrations are charming. You can see some photos of it here on an old ebay listing.

This entry was posted in Christmas, elf on the shelf. Bookmark the permalink.